Ex-Nihilo Pre-Order Merch Bundle! Bundle Includes CD, Ceres logo shirt & decal and free entry to our Album Release Party at the Dark Horse in Missoula if you are in town. Choose shirt size above. Thank you for your support!

Heavy metal from the mountains of western Montana. Hard hitting rhythms, driving riffs and a mix of melodic with aggressive vocals.

Ceres began in the summer of 2018 as a studio project between Mike V. (guitar)  and Paul G. (vocals).  Shortly after Danny B. joined the band as the second guitarist followed by Shane C. on bass.  Daniel F. was the drummer for the band from November 2018-December 2019.  We recently welcomed drummer Curtis H. to the band in December of 2019 and Bassist Jeff Gibson in June of 2020.

2019 was very kind to Ceres. We were a part of 10 shows including 3 metal festivals (Flathead Valley Metal Fest, TotFest and Freaker's Ball), and won the Missoulian's award for the category "Best New Band".

2020 as we all know was a hard year for music all around! With cancelled shows and tours, Ceres still put out a new album and videos. Much more to come in 2021 as we are working on more new music, booking shows and touring!

We want to hear from you! Love us, hate us, or somewhere in between - reach out to us on social media or use the contact form below to let us know your thoughts.

(From Left to right) 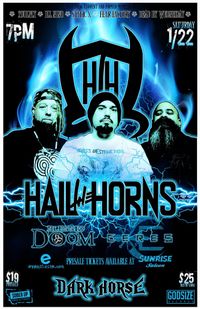